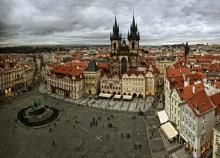 Prague - the capital of the Czech Republic, which is impossible to enumerate charms . Here you need to spend a lot of time to see at least the most important, but not a lot to see and a few times , so you want to come here all the time. Prague attracts the gold-domed historical background and architectural beauty of the buildings. Prague is also called the city of a hundred towers , the city of palaces and temples, and the North Rome.

More often than not many tourists start inspection of this wonderful city from the Old Town Square , where you can see the beautiful temple of the Virgin Mary and the famous Astronomical Clock . No less interesting place and became an ancient cemetery , which originates existence still the 12th century. Devote your time and Charles Bridge .

A stroll in the Prague Castle with a tour of the tower Daliborka . With this tower connected interesting legend about a dead knight. Today in this tower operates museum where ancient books and many other interesting exhibits. At the top , there is a special area where you can see most of the city at a glance .

Worth mentioning bridge over the Vltava , which is one of the most beautiful bridges in the world . It is quite strong and durable . The bridge was built in 1357 . Coming across the bridge , tourists get immediately to an area that is close to the Prague Castle ( considered one of the most romantic places in the city ) . If you look at the area from the bird's-eye view , you can see a large number of small streets that are intended only for pedestrians .

In the center of this ancient city are amazingly beautiful temples and architecture which conquered even the most sought-after architects. One of these churches - St. Vitus Cathedral. The cathedral itself is a mix of different architectural styles. Construction of the temple began in 1344 and it lasted until 1929 , so many styles it involves . Just close to the palace , which was built in 1135 and was the first residence of the Queen .

Do not pass by the golden streets, if you believe the legend, it is precisely on this street scientists and alchemists tried to learn the secret ingredient of the Philosopher's Stone . Known and lesser-known poets wrote poems about this city and if not poetry is at least remembered the wonderful moments spent in Prague. Development of tourism industry here and now everyone can visit the amazing and historically rich city .