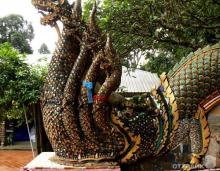 Hospitable city of Chiang Mai, which is conveniently located in a valley surrounded by mountains in the river Ping, is characterized by good fertility, has long been chosen by tourists. The city in those days had more name Lanna, which meant a million rice fields. Chiang Mai, founded by King Mengraem back in 1281, very quickly became an important center of the country, both economically and culturally. Today there live the most skilled craftsmen arts and crafts of the country.

In contrast to the capital city of Thailand does not seem concrete bag, despite the fact that in it as well as in Bangkok numerous towering skyscrapers, which are separated by a high-speed highways. Having a square shape with a side of the old town 2 kilometers surrounded by a moat, filled with water, as in ancient times, and its shores are currently intensively conducted reconstruction of destroyed fortifications. In the old town a lot of blooming gardens, in the shade of which are hidden built beautiful wooden fork, on quiet streets towering temples. It also has restaurants and shops of souvenirs with the products of local craftsmen.
Chiang Mai features a large number of beautiful ancient temples. They number slightly less than a hundred. Here are some of them: Vata Chedi Luang and Chiang Man, Phra Sing. For each of these temples can trace the history of not only the city but also the whole of Thailand.
For example, in the construction of such as Wat Chiang Man behind bars, made of thick steel are the most valuable relics such as the statue of Buddha Power of height 25 cm, made of marble and Setangamani statuette, which is carved from quartz.
Phra Singh is considered the largest temple of the city. It in a room decorated with rich paintings stored Buddha statue Sihing. Not far from this church is the National Museum of the unique monuments of art not only in Thailand but throughout Southeast Asia.
Tourists coming to rest in this amazing city do not bypass the attention and the night market, which is located between the river and the eastern gate, as well as a small village Sankampheng, which are located along the roadside stalls of craftsmen: masters painted the fans and umbrellas, wood carvers and weavers with their cotton and silk fabrics. Buying something on the memory is necessary to remember that can not be exported out of the country any Buddha images, products made from raw bones elephant and other animals, leather products.