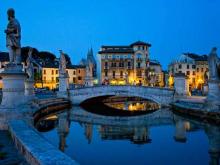 Padua is just half an hour from Venice, but travelers who decide to turn off the busy tourist routes and to come here, it seems like they go into another world. It is founded in 1222 University of Padua, where he lectured Dante, Petrarch, and Galilley Copernicus. In many ways, this is why Padua called something in between Oxford and Venice. Galileo taught here for 18 years. With the telescope he constructed he considered the craters of the moon and the moons of Jupiter.

Pilgrims come to the city to visit the Basilica of St. Anthony and touch his tomb. St. Anthony of Padua is the patron saint of travelers, flight attendants, pregnant women and pig breeders. The construction of the Romanesque-Gothic church with Byzantine domes began in 1231, immediately after the death of Anthony. A year later he was canonized. Above the altar hangs a crucifix, created by Donatello. One of the main relics of the temple is the language Anthony. After the exhumation of his remains 32 years after his death it turned out that his tongue had not turned to dust. Devout paduantsy explained by the fact that in his sermons he was sincere turning to God.
Those who are interested in art of the early Renaissance, enter the Scrovegni Chapel to admire the 40 Giotto frescoes, dating from the years 1303-1305 and depicting scenes from the life of Jesus and the Virgin Mary. These murals were the first works of art to proclaim the end of the Middle Ages. Giotto showed ordinary people experiencing simple human emotions, and although its characters are eternal, frescoes themselves are quite fragile, so the doors of the chapel is not always open - of her visit is to negotiate at least two days. On one of the frescoes in 1304 shows Vifliemskaya star in the form of a passing comet in the sky.

Compared with the neighboring cities of Padua relatively low prices for accommodation in hostels and hotels, and many prefer to stay in the historic city center. Padua has about 60,000 students on its streets is always a lot of young people. Those who defended the diploma during graduation parties put on the heads of laurel wreaths. It is known that Galileo named the 18 years he spent in Padua, the best time of his life. As it is easy to believe - Padova and today attracts those who take the wisdom of the past and believe in the present.