Urbino - a city of the Duke 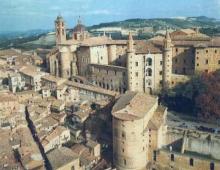 In Urbino the birthplace of the painter Raphael, but the name of the city was the first to glorify one of its rulers – the Duke of Federigo da Montefeltro. When he was a military commander, he was often hired by the rulers of the Italian city-States. And although his account is no special feats of war, he earned enough money in the service of the Pope and of the Sforza family from Milan to turn a modest Urbino to the brilliant capital of the Duchy. In his Ducal Palace was the many ornate rooms and popular in those times of optical illusions.

Of federigo's turning this town into one of the largest centers of the Italian Renaissance, where from all sides came the painters Piero della Francesca, Paolo Uccello and the father of Raphael, Giovanni Santi. There are a lot of churches, because for over two centuries Urbino is under the jurisdiction of the Vatican.
Buses that come to Urbino, stop in the underground car Park under the square Piazza Mercatale. Passing through the old gate, you can climb the via Mazzini to the Piazza della Republica in the heart of the city.
Urbino is situated on top of a hill, it has since Medieval times has been preserved wall with four gates. Two main streets intersect at Piazza case república, which has many cafes. Sightseeing Urbino takes only half a day, and most of the time it takes inspection Palazzo Ducale and the oratorio of St. John the Baptist. Castle of the Dukes of Urbino was built in the mid-fifteenth century, and let his room today seem almost empty, there remain some unique paintings by masters of the Italian Renaissance.
The library is located on the first floor, is presented here for General viewing paintings of the National gallery of the Marche, on the second floor you can see an art gallery with paintings of Mannerist painters. Earlier paintings were more, but when the army surrounded the Vatican city, the last Duchess of Urbino fled to Florence with family heirlooms and married a Medici. In 1657, after the capture of the city, the Pope ordered to transport more than 2000 manuscripts in the Vatican.
To view the panorama of Urbino, worth the climb to the fortress. On the left you can see the dome of the Franciscan Church, on the hill behind it spend the festival of kites. On the right you can see the tomb of the Duke, and not far from the castle – Park, built on the site of the parade ground, somewhere once marched Ducal army. And let the times long gone, the city still remembers the name of the person to whom he owed his fame.