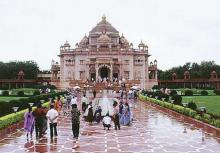 Ahmedabad, it sounds so city name in the English version. In Hindi it is called Ahmedabad. In Russia, there are two names.

Due to the fact that in Ahmedabad relatively few tourists come to the man with white skin look in this city as aliens from another planet. For example, if you suddenly have to go to the tourist in a place Ahmedabad on rickshaw, which is considered quite famous in India mode of transport, it is necessary to be prepared for the fact that you get to the right place at once, as you will definitely show relatives, friends and familiar to the driver.

Prior to Ahmedabad get few tourists, as there is little development of tourism infrastructure and moreover throughout the state operates dry law. However, the residents of this city, and the state in general, the law is only in favor. In any case, in terms of finances, since this state is the most developed in terms of economy the Indian region.

In Ahmedabad, as well as in all of India, luxury skyscrapers coexist with the huts of the poor. Gujaratis make up the main population of the city and the people are Indo-Aryan group with their own language and script.

City Karnavati once stood on the site of modern Ahmedabad and belonged to the Hindu rulers who belonged to the dynasty Solanki. The power of the Muslim city passed in the 13th century, and in 1411 by Sultan Ahmed about Karnavati was founded a new city and named after him.
The city has a peculiar architecture in which such motives as Jain, Hindu and Islamic closely intertwined. Especially this intermingling is reflected in the design of mosques. In arched windows inserted stone lattice, called Julie. And the main symbol of the city is jali, made in the form of intricately curved trunks and branches of trees made of stone. Admire such gratings can be in the mosque of Sidi Sayed, which is located near the fort of Bhadra.
But most interesting is that there is in Ahmedabad and just need to see it Vava. These unique structures in the form of palaces under the ground and having countless galleries, stairs and columns decorated with intricate carvings. In the distant past were designed for storage and rainwater harvesting. With their buildings associated with many legends and stories.
Another landmark is the Calico Textile Museum, which houses the magnificent masterpieces of weaving of this amazing country.