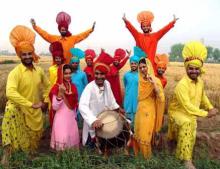 For many centuries, the Indian government manages to maintain a unified identity of the nation, even with all the diversity of peoples and the amount of territory. The main influence on the development of a culture of India has influenced the emergence of a large number of religious trends. In the development of a variety of crafts, culinary traditions and art forms contributed supporters Sikhism, Jainism, Buddhism and Hinduism. The main holiday is the national day of the Republic and Independence Day, in addition to each state spend their holidays, depending on the number of adherents of a particular religion.
The culture of India is largely expressed in the national cuisine. While a variety of dishes used a large number of various ingredients. The most common is milk, Indians can be made from milk hundreds of different sauces and some dishes. Dessert is a different story, which can be found in any cake or candy. In India accepted to use in cooking a large amount of spices, almost all spices make the dish spicy and sharp. Therefore, ordering food in a restaurant, the waiter to warn on the extent of your blyuda.Odezhda in India represented colorful saris, colorful shawls made of natural silk and cashmere, women wear a lot of jewelry in the form of bracelets, earrings and necklaces. This creates an emphasis that draws attention to the beauty of the surrounding ladies, during the classical Indian dance. It is worth noting that Indian dance originated over 2,000 years ago, and according to most Hindus, dance is an expression of beauty and the divine in everyone. In the dance expressed legends and ancient legends, every gesture, produced in dance, bears especially important role.
In India, at present no less significance for culture plays a cinema, which are the main themes of jealousy, love, bliss and wrestling. Heroes movies usually rich, but unhappy people who want to be happy, regardless of class prejudice and caste. The themes in the film were the theatrical traditions of India. The oldest area of ​​the theater is a dramatic theatrical tradition of Kerala, which originated as old as the Indian dance, which is about 2,000 years nazad.Kultura India is diverse, and if you decide to spend in this beautiful country of your vacation, be sure to find out about her more.