Mexico City - the capital of Mexico 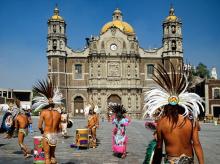 Mexico City - Mexico became the capital since 1821 , when the country gained independence from the Spanish colonizers . City was founded in 1325 by the Aztecs . The city is located in the heart of the country , in the south of the Meseta . Currently, Mexico - cultural, economic and industrial center of the country. The city's population more than 8 million people, and the entire urban agglomeration - more than 21 million

In a big city can not do without a well-developed transport infrastructure. So in Mexico City was built the largest in Latin America, the metro network . More than 160 stations on 11 lines. Also ply the city trolley buses, trams and buses. However, the most convenient mode of transport is the taxi. In Mexico, several bus and two international airports receiving domestic and international flights .

In Mexico, preserved many historical and architectural monuments of different eras. Chief among these , perhaps, is the Templo Mayor - main temple of the ancient Aztec capital of Tenochtitlan state , located on the territory of modern Mexico . Construction of the temple dates back to the XIV century. Currently the temple ruins and the museum in its territory open to tourists.

Another interesting place is the Chapultepec Park , spread in an area of ​​800 hectares. Currently, the park is recognized as the largest urban park in America. The park operates the zoo , the Anthropology Museum and Chapultepec Castle , which now houses the National History Museum . Also cause considerable interest and other museums of Mexico City , for example, the house-museum of Lev Trotsky or the house-museum of the famous artist Frida Kahlo . Squares and avenues of the city , the Opera House , the cathedral - not the entire list of Mexico City attractions .

Rich heritage of the land in considerable volume and preserved to our times , allowing touch the secrets of a great civilization .