Orinoco - the younger sister of the Amazon 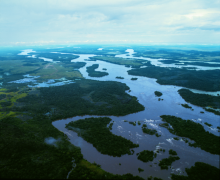 Great Andes are the birthplace of one of the most amazing rivers of South America, the Orinoco.

The main feature of this river is considered the variability of its water color depending on the season. In addition, almost every tributary of the Orinoco has its own unique color, which is due to the composition of the soil. Strong impression on most travelers produce the confluence of this great river and its tributaries.

Living on the shores of the River Indian tribes with great respect to the Orinoco. Appeared on this site in the 16th century, Europeans kept the name of the Orinoco, which means "river". Indians themselves called themselves "Warao" or "boat-people" because they lived in houses built on the water's edge and moved between homes in boats.

Currently, tourists enjoy visiting unique village remaining Indians, where they can explore the features of survival in the dense tropical forests, fishing, hunting crocodiles and woodcarving. Acquired various souvenirs made by local craftsmen these easily fit into the interior of a city apartment or a country house.
For a more complete acquaintance with the identity of the Warao must experience the beauty and danger of local jungle in which today home to a huge number of different species of birds. But the most popular inhabitant of Orinoco Delta is the anaconda, the biggest and most dangerous snake in the world.
Depending on the season of the Orinoco appears before the tourists almost limitless sea, from which "stick" only unique palm thin and straight trunks or mesmerizing savannah with scattered small lakes left over from the tributaries of this great river. Enjoy union with virgin nature allows accommodation in unique ecological around lost in the jungle of Puerto Ordaz.
Not as much fun and bring the city, located on the river below, and the removal of deposited silt from the bottom of the Orinoco, allowing huge ships rise far up the river.
Journey through this amazing and so different river allows you to experience the diversity and exuberance of wildlife, enjoy her creations not only the animal, but the plant world. Due to the high humidity, which during the year on average is warming up to + 27 degrees Celsius, many plants are imbued with life-giving moisture and clean, which can quench your thirst.