Buenos Aires - the history reflected in the architecture 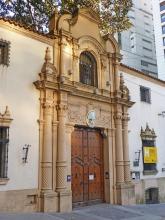 Argentine capital - Buenos Aires, located on the bank of the Rio de la Plata in the Argentine pampas. Founded in 1536 on the site of the modern city of the Spanish settlement in five years was burned in an attack Indians and rebuilt again in 1580. The formation of the modern aspect of Buenos Aires except colonial past has left its mark, and the fact that in the early 20th century the city became one of the main centers of mass emigration of the inhabitants of Europe to South America.

One of the main attractions of Buenos Aires is the palace of the Casa Rosada - the residence of the Argentine president. Visitors to the palace are usually allowed to inspect cabinet Rivadavia, Hall busts, where you can see the busts of all legitimately elected Argentine presidents and the Palace Museum, which operates in areas which have been preserved from the fort of San Miguel early 18th century.

It is in the center of Buenos Aires is Argentina's main Catholic Church - Cathedral, which was built as much as 38 years and opened its doors to the faithful only in 1791. Facade of the temple is in the style of the Paris Bourbon palace, and inside the temple you can see the tomb of the most revered Argentines national hero - Jose de San Martin.

The best place for walks in Buenos Aires in July Ninth Avenue is named in honor of the July 9, 1816 - the day when Argentina was declared independent. Bold at the time the project on its construction began implementing July 9, 1937. Today, on this very broad in the world is a large part of the best restaurants, trendy shops and the most beautiful buildings in the capital of Argentina.
Those who want to learn more about the history of Argentina can recommend to visit the National Museum and the Museum of Argentine May Revolution, which operate in the Cabildo - a historic building of the century, which is a fine example of colonial architecture.
Another attraction of Buenos Aires - Recoleta Cemetery, where many of the crypts recognized cultural and historical monuments. Recoleta on such famous Argentines are buried as Nobel laureates K. Saavedra Lamas and L. Leluar, Bioy Casares A. writer and one of the most famous Eva Peron argentinok.
And of course familiar with the Argentine capital can not be considered complete without a visit to the principal symbol of Buenos Aires - Obelisk in honor quatercentenary foundation. The height of buildings 67 meters and reach its summit can be overcome only 206 steps.