Latin America - the most interesting places to travel 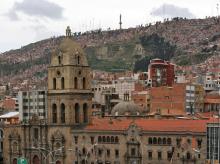 Voyages in this part of the world chosen as holiday infrequently, saying "no" to the long flight, unexplored until the end of the peculiarities of life and customs, as well as the cost of tours, at times exceeding a trip to other countries. However, Latin America has something to conquer anyone, even the most discerning traveler. So, what to see, want to return to the South American continent?
"Who you created this?"
Search for answers to disturbing the minds of more than 130 years of questions will lead you to the Chilean Easter Island. On it is practically nothing known, since its causes and finishing Moai stone statues, of which there are 887 Enormous statues (increasing to 21 m and weighing up to 90 tons), according to legend, were the protectors of the islanders, who in the 15th century. BC. e. if evaporated.
In the pampas for Grant.
Satisfy a craving for adventure, developed in childhood by Jules Verne, best able to Patagonia, neighbor of Chile and Argentina. It was here on the 37th parallel went yacht "Duncan" to seek the missing Captain Grant. Patagonia - a place where the steppe, which can not grasp look pass into the mountains, and on the beaches; where the sandy coast of the peninsula Valdes takes to settle clans penguins and endangered southern right whales; where every day is "thinner" blue Perito Moreno Glacier a height of 30 km, giving extra pounds mountain lake.
Without oxygen.
Be in South America and not walk the streets of the highest city in the world - a sacrilege. La Paz, Bolivia, which accounts for the unofficial capital and is located at an altitude of over 3,500 m., You will see the absurd contrast: here you are the Spanish colonial buildings and cholit (local Indian) in their favorite hats, bowler hats; then 3D-cinema with the latest films at the box office and the Witches Market, where you can buy all sorts of magical potions, charms and items for shamanic rituals of Native American tribes. A couple of kilometers located Moon Valley - a kind of stone maze-like surface of another planet.
In the rhythm of Mañana.
Eager to dash off away from the bustle of big cities, to get a great tan or conquer a wave to surf - fit the Venezuelan island of Margarita. Here's where you can live on a "Mañana" (literally - tomorrow) not in a hurry, because all cases there is a tomorrow. On the island, which is even better looking than the coast in advertising heavenly pleasure, stretch, not ending, the beaches of sand and pebbles, and the temperature rarely falls below 33 C. If you want to - go fishing with a guide, you want - swim side by side with friendly dolphins, and want to stay a hero Latin show - rent a handsome stallion and Uskach right into the sunset. By the way, the name of the island itself gave Christopher Columbus - Margarita name Austrian princess, secret love sailor. And the islanders believe that he appeared when crying angel. Therefore, take out from the bottom of the sea a beautiful pearl, "tears of an angel."