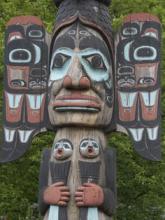 Totems - high wooden beams, decorated with lovely characters and patterns. Geographical area, which became home to the totems - Northwest Coast of North America, and the people that created them Indigenous peoples of the Pacific Northwest Coast of North America. This area - the only place in the world that created totems, so it is also jokingly called Region totem poles.

Totemic sculptures carved from large trees, often from Western Red Cedar. Once the tree has been selected and cut down his hollowed out. It was then marked out into equal parts in order then to strike on it designs. After the carving was done, sometimes not a carver, a totem covered with shades of red, black, green and blue colors.

There are several types of totems, depending on the cause for which they were made. For example, there were memorial totems that they feared the dead and the living, the pillars for the house, which supported the roof, totems of the main entrance, welcoming totems, etc. In addition, totems created as a means to convey the story, myths and legends of Native American culture. Totems for the Indians of the northwest coast were a means to communicate and remember past events.

One of the most interesting types of totems - a pillar of shame. These poles were cut that would embarrass and ridicule someone who did something bad. Pillar of Shame communicated when people recognize their mistake and paid compensation. One of the most famous Pillar of Shame was erected in Cordova, Alaska. He portrayed the face of the owner of the oil company. They say that this post personified unpaid debt that the oil company had to pay for the damage caused by the oil spill in Alaska.
The term "totem" is derived from the word ototeman, which means blood relationship with his brothers and sisters. Totem can be a companion, a relative, an advocate, helper, supernatural power or ancestor, and he serves as a symbol of the family or person. The Indians believed that there is a relationship between a group of people on the one hand, and the type of animal or plant on the other.

Totems - a visual narrative mythological began the great families from the time when animals and humans lived together as equals. These posts - totems are a form of written records of history and culture of the great people - Indians of the northwest coast.