The largest city in the region - Canakkale 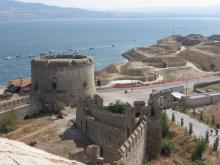 Çanakkale is not only the largest city in the region, but also an excellent base for exploring the area. The city has several quite decent hotel, the beautiful waterfront, which offers stunning views of the Strait, and a couple-three restaurants serving delicious seafood. There are clubs in the city and where fashionistas and fashionistas can demonstrate dresses from famous designers.

Not far from the city center stands the Ottoman fortress dating back to the 15th century. It is, however, closed to tourists, but next to it there is not a very big museum of the Navy, where you can look at a copy of Nusret mine layer, through which was prevented by the Allies capture the Dardanelles.

South of the center, at the Troy road is an archaeological museum with a variety of local finds, in particular two interesting sarcophagus decorated with beautiful carvings. True to move the museum paid, but he works every day.

From this city from the pier by boat or ferry, someone like that, you can make a short but very memorable excursions to the islands of Gökçeada and Bozcaada, the largest of the Aegean islands, which belong to Turkey. The origin of the two volcanic islands, the islands are beautiful sandy beaches. The population of these islands adheres to the Greek Orthodox Church, but the similarity ends there.

Gökçeada, otherwise it is called Greek Imbros, much more, has a more spectacular landscapes, and a few hundred Greeks still living in the few remaining villages. In summer there is a festival of Greek culture. But transport is quite rare, so it is better to travel to rent a car.

In the Greek island of Tenedos or Bozcaada, exquisite architecture, loves to come here almost all the elite of the capital of Turkey, and in this connection in a given period of time, a sharp increase in prices.

True wine lovers here can enjoy great wines from local grapes. Tourists can also enjoy the magnificent castle guarding the port and which was rebuilt each time the conqueror of the Aegean coast. Throughout the island there are only a small number of Orthodox Greeks, and so here, in contrast to Gökçeada not held worship, and no one to carry out their own due to the complete lack of priests.