Главная / Природа Гайаны / Kaieteur waterfall - the most powerful in the world stage.

Kaieteur waterfall - the most powerful in the world stage. 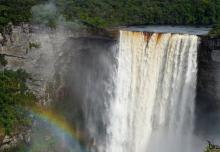 Kaieteur Falls is not the highest in the world, its width is inferior to the waterfalls of the Big Three, but it is the most powerful and strong stage in the world. Tons of water falling from a cliff into the abyss, shrouded in mist and rainbow pierced, and for tens of kilometers around the stretch impassable wild jungle. This waterfall is worth it to see him. Suffice it to say that the Kaieteur five times higher than the famous Niagara Falls.

Is this wonder of nature in Guyana - the only country on the South American continent, the official language of which - English. Waterfall - the most popular tourist attraction in the country, the existence of which even few people realize. Kaieteur - one of the most powerful waterfalls in the world and especially in combination of a large volume of water and the height of its fall - 226 meters. No other waterfall can not boast of such characteristics.

Kaieteur is surrounded by tropical forests, which are not touched by the hand of man, which is long gone alongside the more popular and large waterfalls. No crowds here and continuously taking pictures. By visiting this site, the man is alone with nature.

Energy of water falls is so strong that it forms a permanent hurricane at its foot. In the pond at the foot of the wave never fade, and the weather is very windy and cloudy, but it is necessary to move a few meters, as the wind dies down and starts to shine brightly the sun. And it's not the only unusual terrain. It is here, just below the falling water was first discovered a new mineral - Potaro. This is very rare mineral is an alloy of palladium and mercury.
In 1926, around the waterfall was created Kaieteur National Park, which became the oldest national park in the Caribbean and South America. Having been here you can see rare plants and endangered animals.
Getting to the park can be either on foot or by starting the path from the surrounding area of the city of Mahdia, so comfortably and on the plane. Difficult trek on foot takes three days, but can be a real adventure, memorable for a lifetime. Near the waterfall there is a small convenient airstrip, but not far from it - guest house, where you can spend the night.
Best time to visit Gayany and Kaieteur - immediately after the end of the rainy season, a dangerous characteristic of this climate. In Guyana, the prolonged rainy season and falls to the time from April to August, and then, after a short break - from November to October. But it was after this season, you can assess the full extent of the power and beauty of this extraordinary imagination and endearing place.