Want to see the penguins ? Welcome to South Africa ! 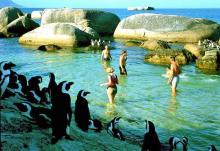 At the mention of penguins our imagination paints a floe freezing cold and biting wind , from which the poor little bird has to protect their offspring. Yes , that's right , penguins live in Antarctica. But the fact that this bird desperate traveler she can swim a distance of up to 700 km , so it can be found in the Indian Ocean and even the coast of Africa - in South Africa.

African Penguins , or as they are called chernolapye , took a fancy to a part of the South African coast , washed by the cold Benguela Current , live only here and nowhere else . In appearance they are very similar to their Antarctic brothers, but they have another feature that spots, which are very individual character. They are akin to fingerprints of people and can not meet the penguins with the same arrangement of spots.

In character and behavior , they also do not differ from the penguins of Antarctica. Also create a mate for life and share all the concerns of the younger generation equally.

Locals call their penguin donkey . This is due to the fact that they have a nasty voice , reminiscent of bray .

If chinstrap people unusual, then the African penguins that not surprise . In contrast, constant proximity with people made ​​them very friendly and sociable. A steady stream of tourists wishing to witness the African penguins, and made ​​them a little more brazen . Birds unceremoniously explore things tourists and curious chicks can also grab a souvenir favorite gizmos .

And recently , a colony of African penguins literally invaded and colonized the resort town of Bettys Bay. Birds feel in home. By accessing the yard, looking for something to make money . Them down as snow covered the entire neighborhood . But all would be nothing , but at night they put on a roll , and mindful creepy voice penguins , many residents do not stand nerves. The city authorities have yet powerless - because African Penguin and rare bird listed as endangered . So do not be destroyed , but as a chase penguins unclear. Only who are happy to invasion , so are the children - they are fun to collect birds' eggs , bake and eat them . Go to this resort town , while there is an opportunity to see such a unique phenomenon , the price of the tour is not too high, and will be a sea of impressions .

Now, when you hear that penguins live in Africa , do not laugh , but better ride to look at this miracle of light!