Winter holiday on the South Coast of the Crimea 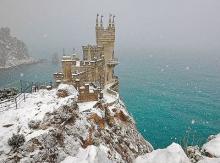 Once, when the film came out "Assa" , any talk about the Crimean southern coast in winter cause the inevitable series Synonyms : palm trees covered in snow , deserted restaurants, a storm and a taxi which takes away Govorukhina in Simferopol . It may seem that the exact same image can be found in Sochi, in Istanbul. But it is in vain : the film's author Sergey Solovyov ( ACCA abbreviation stands so) long distorted our understanding of the off-season Crimea .

In fact, the winter snow Crimeans can see once in seven years . Calendar is here measured by other milestones . Those people who had a great opportunity to stay in Crimea until the beginning of October , there were probably witnessed an amazing metamorphosis. Suddenly one night, in spite of still warm sun and the sea, close all , without exception , summer cafes , all pleasure boats stop working and street seaside settlements emptied simultaneously , as all the campers leave. This means only one thing: the velvet season closed and awaiting the arrival of the Crimea in the autumn. Its signs - bottomless gray sky, which merges with the endless gray sea birds fly south , frequent storms , instead of tourists - pickers who nursed baskets and move on altitude cable car in the direction of Ai-Petri. And most importantly - businesslike local residents who have not yet managed to pull everything greedily acquired over the summer. They vainly expect to attach to their personal guest houses , which are so much like birdhouses , a couple more beds .

Now, however , the passion relax , which languish in any Crimean cypress , is every year more than a passion for the work, and therefore the beginning of November , as a rule , Holiday money runs out , the entire Crimea freezes and falls into a real winter hibernation. Good weather is again set . Returned to shore dolphins, who disappeared in the spring. Eyes open on the shores of the Crimean real treasures that survived another foray countless northern barbarians . For announcements , such as " rent turnkey" that hang on the numerous wooden fences , open the outline villas (early twentieth century ), which are the names of graceful "Xenia" , "Dream" , "Cameo" . Mountainsides here and there becomes visible masonry dance porches and gazebos Stalin . By the Promenade des Anglais Balaclava returns unique Victorian fog. Thistle bushes parted , revealing a half-century fragile wisteria . From the dock in Sevastopol goes slowly , baring guns, majestic missile cruiser . In cool orange sun ceases Katsively visible ambitious plan designers unfinished resort Academy of Sciences , who conceived Soviet architects .